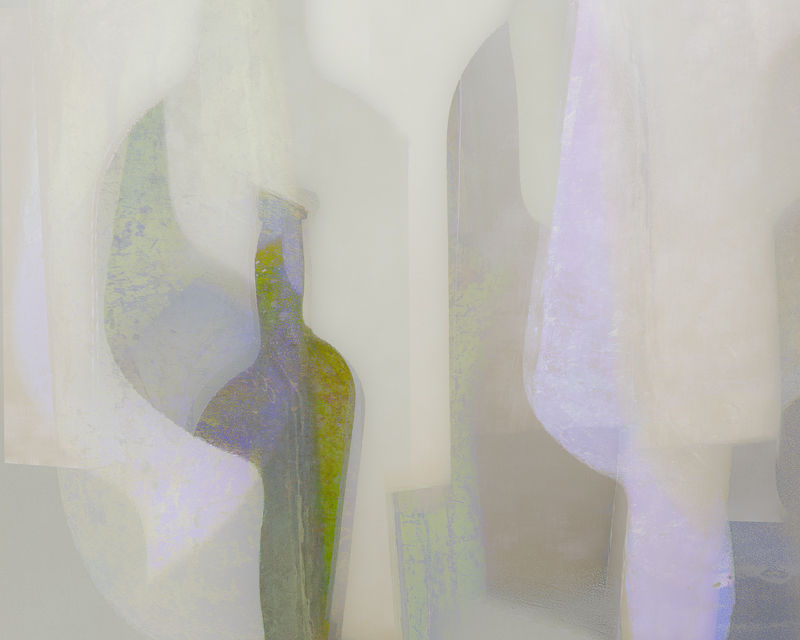 Ever since the earliest days of photography, this new method of creative expression has sat uneasily in the art world. Many steeped in the more traditional techniques of painting, drawing, sculpture, along with a large proportion of gallery owner’s, collectors, critics and museum curators have viewed it as a somehow less worthy art form. Perhaps it seems rather easy compared to other crafts – more dependent on the equipment than the skill of the practitioner. Yet, the earliest photographers were artists first, intrigued by this new medium and it wasn’t long before they were looking for ways to abstract the images they were making.

The paucity of significant museum exhibitions devoted to abstract photography testifies to this state of affairs. MOMA in New York held a flurry of three such exhibitions between 1948 and 1960 (In and Out of Focus 1948, Abstraction in Photography 1951 and The Sense of Abstraction 1960) The next internationally important exhibition was ‘Shape of Light’ at Tate Modern, London in 2018 – a gap of almost sixty years. This seems to bolster the view that abstract photography is the poor relation of the art world.

Despite this wariness toward photography, we can see it shares a history with art over the last century as abstract explorations in the darkroom ran parallel with Cubism and other forms of modern art. While photography is the ideal tool for creating perfect copies of reality, there have always been photographers who are mentally emancipated from the need for slavish reproduction – those searching for a more impressionistic way of making images. Back in 1905, Alfred Stieglitz opened his ‘Little Galleries of the Photo-Secession’ at 291 5th Avenue in New York (which soon became better known by its nickname, ‘291’). His goal was to showcase the newly emerging Pictorialist photography. Within a short time, the gallery became a hub for this and avant-garde art – from both Europe and America. Edward Steichen became involved, helping with the selection of artists who would be exhibited based on his experience from living in Paris. It became a place to see works by Cezanne beside Stieglitz, Picasso and Braque accompanying Steichen and Matisse along with the abstracts of Paul Strand.

Interestingly, in conjunction with running his 291 gallery, Stieglitz was also a founder member of the Photo-Secession group. Other notable members included Steichen, Clarence H. White, Gertrude Käsebier, and Alvin Langdon Coburn. These photographers broke away from the more traditionalist Camera Club of New York in 1902 and pursued Pictorialism. This approach espoused manipulating negatives and prints to produce the effects of drawings, etchings, and oil paintings. They produced a quarterly magazine entitled ‘Camera Work’ and actively promoted photography as an art form.

Even earlier, in 1892, a group had formed in Europe called the Linked Ring (or, more formally, the Brotherhood of the Linked Ring), that had similar goals. While members made images in differing styles, they were united in rejecting the technical approach to photography that traditionalists were propounding. Several members of the Photo-Secession group went on to become members, including Steichen, Stieglitz, Gertrude Käsebier, and Clarence H. White.

If we discount scientific photography, then perhaps the first truly abstract photograph could be “Winter Landscape” made in 1909 by George Seeley. It is suggestive rather than descriptive, a snowy landscape as the source, but reduced to pure shadow and curve forms, leaving much room for audience interpretation. Around this time Alvin Langdon Coburn made a remarkable image in his home city of New York, looking down on a Manhattan roundabout from a skyscraper. ‘The Octopus’ of 1912 was a visual shock to viewers unused to viewpoints such as this. In 1911, Linked Ring member Pierre Dubreuil explored both cubism and vorticism with his photograph, ‘Interpretation Picasso, The Railway’ which he embellished with ink and pencil. From these early explorations, abstraction in photography became more widely explored. Examples include Man Ray and his poetic ‘Rayographs’, which he created by drawing with light on sensitive paper. Or László Moholy-Nagy, the constructivist artist and instructor at the Bauhaus school, who was fascinated by creating Photograms with light, forming geometric shapes arranged over the surface.

While abstract photographers were keen to establish that their practice was an art form in its own right, that is not to say that they weren’t significantly influenced by artists working in abstract painting. Take, as one example, the photographer Aaron Siskind. He taught alongside Robert Rauschenberg and Cy Twombly at the Black Mountain College. Siskind’s abstract photography went on to be exhibited at the important Egan Gallery in New York – a gallery that also showcased paintings by Franz Kline, Willem de Kooning and Rauschenberg. Siskind, influenced by such painters experimented with the presentation of his photographs, eschewing the mundaneness of regular frame and mount configurations, replacing them by mounting his images on Masonite boards. He became known as ‘a painters photographer’. This cross-pollination of ideas worked both ways. For example, it is believed that De Kooning used an abstract photograph of Siskind’s, ‘New York’ (1950) as he worked on his painting, ‘Woman/1950-2’. So, this may indicate that among a few practising abstract artists there was respect for at least some photographers working in this area, despite the relative youth of photography.

The majority of abstract photography which has gained credence in the art world is analogue, either made entirely in the darkroom from pure light and light-sensitive materials (such as Arthur Siegel’s ‘Motion-Light’ studies) or more conventionally with cameras and lenses and then processed in the darkroom. The advent of digital photography appears in most ‘official’ quarters to have been met mainly with much scepticism.

This is understandable. Modern cameras are essentially computers with shutters and lenses – capable of amazing optical gymnastics, should the operator so wish. Much of the perceived craft associated with analogue photography appears to have gone – especially that which is part of large format image-making. All the upside down and reversed composing under dark cloths, working with silver gelatin and platinum palladium – the mathematics, the alchemy and chemistry of it all. The pure struggle of getting an analogue image to print adds perceived value, certainly. To the uninformed, the point and shoot, click and print world of digital for the masses just doesn’t cut it with those interested in ‘serious art’.

As a result of this, we have found ourselves in a no man’s (no person’s?) land. Caught creatively, not just in the void between photography and traditional art practices – but also cut off from the part of photography that has scraped acceptance in some areas of the art world.

As we are part of something new, neither side really know what to make of us. They don’t know how to define us or judge what we create. The more conventional, representational photography world have no labels or beloved rules by which to judge and classify us. We don’t fit in with them. On the art world side we seem to be tarred with the iPhone/Hipstamatic generation/Photoshop tomfoolery/Digital/‘it’s so easy my kid could do it’ brush and swept aside.

But this experience is similar to many new art movements in the past. It takes time for the world to catch up. In the meantime, as passionate artists, we remain undeterred and will forge on in our craft whether it be recognized or not. As all artists know, the urge to create is a fire that burns inside us and it is not dependent on recognition. We must create.

Throughout the twentieth century, various proponents of abstract and expressionistic photography were proposing different ways of describing what they were doing. In addition to Stieglitz ‘Photo-Succession,’ we have, in the early 1950s, German photographer and critic Otto Steinert coined the phrase ‘Subjective Photography’. Another German photographer, Peter Keetman, used the term ‘Fotoform’. The Bauhaus school spoke of ‘New Vision’ and so on. All these and any subsequent attempts to describe impressionistic abstract photography seem to fall short in capturing the essence of what, as artists, we are trying to convey. For this reason, none of these terms has stuck.

This search for a term to describe what they were doing addresses an issue with calling it ‘abstract photography’. While convenient, it feels somehow inadequate. Those of us working now with digital techniques, like intentional camera movement (ICM) and multiple exposures (ME) have also been debating the fact that using these terms is to describe our work is equally unsatisfactory.

Firstly, we are not process focused. Yes, we may well have used ICM and/or ME techniques as part of creating our work. But we may also have used other in-camera techniques, manipulated the image significantly in the digital darkroom and latterly outputted the file as a physical print and then applied any combination of physical processes to embellish the print to create a ‘one of one’ unique physical work of art, far removed from any in-camera technique.

It is also true that while we may use a particular technique on one of our images, we may not use it on others. What we have been searching for is a term that encompasses the style or genre of work we are creating, much as artists working in more traditional forms have.

Valda and I have had long discussions around this subject. We have talked around the kind of words most often used by artists working in our field or by those talking about our style of work such as ‘painterly’, ‘abstract’, ‘impressionistic’ ‘creative’ and ‘expressionistic’. Which seem most universally applicable? We are also keenly aware of the influences of Modern Art movements, including the Abstract Expressionists, Cubists, the Bauhaus and others in what we do.

After long deliberation, and with huge respect for the giants on whose shoulders we stand, we would like to propose that we define ourselves as ‘Photographic Expressionists’.

We feel this links us both to the artists work that we derive inspiration from while being proud of our roots in photographic practice. It allows us full scope to work in mixed media – be that digital or analogue as well as incorporating art and other materials in the presentation and embellishment of our work.

We certainly don’t claim to have invented this term. A quick Google search will reveal a Flickr group with it included in its subtitle and the photographer Rick Doble claimed to have coined the phrase ‘photo-expressionism’ back in 1999. No doubt it is used elsewhere from time to time. What we would like to do is establish it as a clear definition for the kind of work we are doing so that it becomes an accepted and understood genre.

We should also make it clear that we don’t feel a need to categorise our work for our own benefit. We are quite clear in our own minds what we do and love having complete creative freedom to make images in any way we choose. Rather, we offer this genre as a means to help others (such as the aforementioned gallerists, critics, museum curators, judges and so on) who do seem to need a way of identifying our work in order to accomodate us and welcome us ‘into the fold’. In the meantime, we are more than happy to make our work with the excitement we have always felt exploring art free of rules and boundaries – something which ‘Photographic Expressionism’ espouses.

It is our fervent hope that then over time, more galleries, museums, critics and collectors will also understand and accept what we do and see us as the next natural step in the evolution of expressionistic and abstract photography – blurring the gap further between the photographic and more traditional art disciplines.

This will certainly be the way we describe our work from this point forwards. So, welcome to the world of Photographic Expressionism.