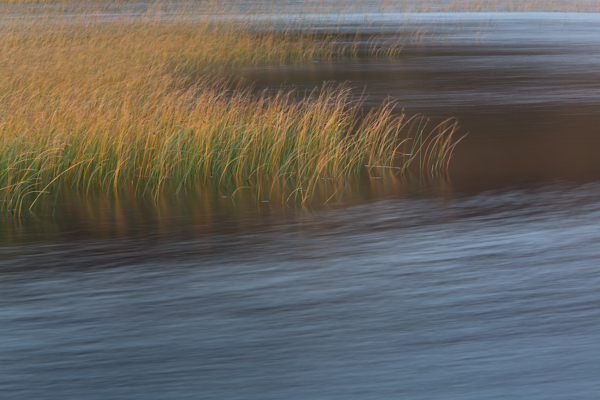 We gathered outside the hotel only to be greeted with murky skies and drizzle but to make the most of what light there was and to get something out of the herculean effort we had put into getting up, we set up to make some images. Rather than work against the conditions and get frustrated with rain on the filters, I suggested the group leave the tripods behind, choose a lens with a tubular lens hood, crank up the ISO and shoot the layers of hills with light emerging through the swirling cloud. The conditions really lent themselves to moody black and white images.

At least we were only minutes from the hotel and a sumptuous cooked breakfast where we planned the day ahead.

We headed off onto the road to Elgol. Our first stop was the ruined Kirk at Loch Cil Chroisd. Here is a small stone built church with an ancient graveyard. The roof has long gone but the walls are lichen covered and inside ferns grow from the walls. Outside an ancient Ivy grows up, entwined through the stone wall. A great photographic subject. A short distance further on is Loch Cil Chroisd which has a stunning reed bed. We spent some time here photographing the reeds and a fence which drops into the water. We fended off the usual enquiries from passers by asking which rare bird we were photographing. Why do people always seem puzzled when you explain to them you are photographing the landscape?

We were also approached by a photographer who had driven for thirteen hours with his friend to Skye to take photos. He asked if anyone knew anything about Canon cameras and the group, helpfully (!), pointed him in my direction. He thrust his camera at me and asked if I could help fix it as it seemed to have stopped working. I asked what the problem was and initially said that “it was just like that this morning”. “Just like that” described the way it was locked up, with nothing functioning. I did the usual things, power off and on again, removed the battery and put it back in. No improvement. I then put my eye to the eye piece and couldn’t see anything through it. My first thought was the lens cap was on, but, no, it was off. It was then he said, “I ought to mention it got a bit wet yesterday”. Ahhh! I sensed more was going on here. But why no image in the viewfinder. I removed the lens to find there was no mirror on the mirror mechanism. I looked up at him. He looked back. I raised my eyebrows. He said, “oh, yes, a little mirror thing fell out yesterday. My girlfriend looked it up on the Internet and it said that it had to go back to Canon to have that fixed but I wondered if you could fix it or if it would work without it”. I replaced the lens, handed it back to him and told him that his girlfriend, and the Internet were right. The camera was dead and did need a professional repair. I do wonder sometimes.

Our day ended at Elgol. The Cullin were shrouded in cloud but this came and went, revealing and concealing the peaks. Showers were sweeping across the scene backlit by the sun, giving us some wonderful photographic opportunities. The temperature is dropping here now as forecast and we certainly felt it, exposed on the rocky beach at Elgol. It became evident that the weather was closing in again and that, while the sun was going to set, we weren’t going to see it. So it was back to the hotel for a meal and bed.

The weather is set to change tomorrow. The morning might be showery but northerly winds are bringing broken clouds (and a possible chance of seeing the aurora and even a dusting of snow on the Cullin) and much colder temperatures. It will be exciting to see what images this leads to.