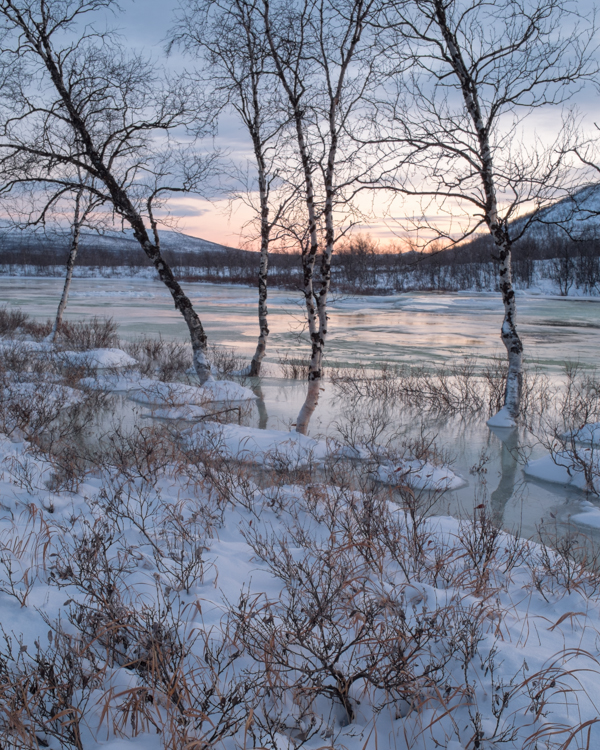 Well, it’s been quite a day. As a group we took the decision last night to leave Sommeroy this morning as the weather forecast for the rest of our trip was dire. A low pressure system was going to dominate the whole of the north Norway coast for the next four or five days. Along with high winds driving snow and quite high temperatures for the time of year it meant that photography would be virtually impossible and certainly photographing the aurora would be almost certainly impossible. The cloud base would be just too low and too dense.

Once this decision had been made we headed off into the storm this morning on the 10 hour drive through Norway, down through Finland and into Sweden. In line with the forecast the storm in Norway was fierce. Gradually as we drove down through Finland the storm abated and the weather improved. We even managed to briefly stop beside a partly iced river to photograph the setting sun. Finally in the dark around 6 pm we arrived at our destination.

We’re now basing ourselves in the Swedish town of Kiruna. This town is surrounded by fast tundra and beautiful pine forest. Even in the headlights of the vehicles we could see the trees were covered in heavy hoarfrost. This will be a subject of our photography tomorrow. On the journey down the aurora activity increased considerably however in the last couple of hours cloud has rolled in and it seems unlikely that we will see a display tonight. But this increasing activity gives us hope that we will see the aurora over the next couple of days. The weather forecast here is much more favourable with clear skies and very low temperatures. In fact just north of here we experienced the lowest temperatures of the trip so far. The temperature gauges in the vehicles dropped below-20°C.

In the picture above of the silver birch trees I used the new 23 mm F 1.4 lens on the Fuji X-Pro 1. This was the first real photograph I have taken with the new lens and it has performed well. The shoot by the river was a bit rushed due to the failing light and us being on a long trip in difficult conditions. The temperature here was around-15° centigrade. (now I have uploaded it , twice, the image seems unsharp on my blog page but the original file and jpeg I am uploading are tac sharp – to be honest, I am too tired to fix it today, not sure what the issue is??? But the original is fine). The second photograph of the old shed door was taking yesterday on the Canon 5D mk3.

So, hopefully, tomorrow I will be able to report that not only have we had a good day shooting the landscape but also we have had our who first opportunity to see and capture the northern lights. But for that, as always, we are in the hands of the weather and solar activity. Certainly coming here gives us our best chance on both counts.